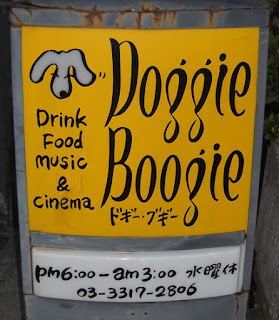 For disco dogs. No cats allowed.

I never took much notice of the way stores were named in the U.S. until I'd spent many years in Japan (mostly Tokyo). In the suburban California area that I currently live in and the neighboring areas that I have visited, I'm shocked at the bland and generic look and feel of most of the stores. Many of them are strip malls and shopping centers with nondescript names and typefaces. I'm talking about places with just "Salon" written on them in a san serif font against a dull-looking edifice. I'm amazed that such places can attract any customers at all. I certainly am not drawn to them. It could be that I'd see a lot more color if I were living in a major city, and I did see some more interesting shops in San Francisco, but even in the outskirts of Tokyo, things seemed to have more of a life and identity than what I have been seeing here.

I knew I'd miss the chuckles I got from shop names in Japan, but I think I miss them more than I could have expected because things are much more boring here than I remembered (or than they were when I was last here).
Posted by Orchid64 at 8:00 AM