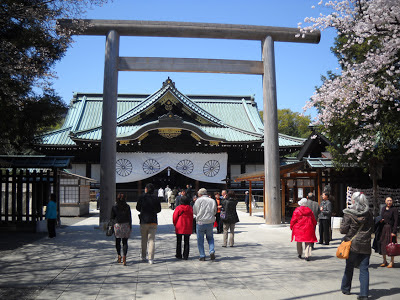 Yasukuni shrine is one of the few places in Japan that openly acknowledges that Japanese actually fought in the war (as opposed to simply being unwitting victims who got nuked for reasons that continue to mystify them). It enshrines the souls of soldiers, generals, and others who took part in all aspects of the fight. Unfortunately, some of those enshrined there were determined to be war criminals by the rest of the world and that is where the flap comes in. Being enshrined there gives those whose spirits are there a "get out of hell free" card and allows them to rest in peace. The situation at Yasukuni  itself doesn't really change any present reality, nor does it necessarily deny the past. War is not a personal thing. Death is. The families of those who died deserve to feel that their ancestors' spirits rest as peacefully as the families of those on the other side. But, that's just my opinion. I don't see the actual shrine as being anything other than a place designed to heal personal wounds in the aftermath of a terrible war.*

Unfortunately, the fact that prominent politicians have (and likely will) continue to make a pilgrimage to Yasukuni on New Year's makes the situation very political rather than personal. Koreans and Chinese in particular see any Prime Minister or high ranking official who goes there as essentially thumbing his nose at Japan's Asian neighbors. Personally, I feel that it's just a way of pandering to political extremists. If it pisses off Korea and China, well, that's just gravy in the quest to get the right-wingers to rub their hands together with spiteful glee.

I don't miss the annual brouhaha over Yasukuni, whether it be the flurry of critical comments when prominent politicians actually visit it or the "will he or won't he" articles on whether or not the visit will actually occur. I don't think it was ever intended to play the part of a villainous place, and that the intention was never to be a point of contention with Japan's former adversaries.

*I'm not interested in playing a game of "who was worse" in World War II. Comments to that effect will not be replied to because I don't think anyone knows the depth and sophistication that went into the start of the war, let alone any of the actions that followed. If you want to go fight about this with someone, this is not the right place.
Posted by Orchid64 at 8:00 AM