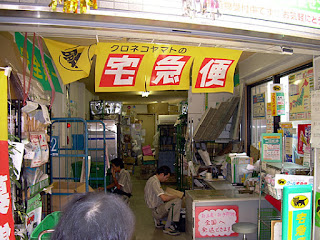 When I returned to America, my husband and I lived for several months on Lopez Island in the San Juan Islands. Because we returned home with nothing more than 4 suitcases to our names, we had to start buying certain things to set up house in the U.S. One of the things I needed, for instance, was a monitor for the Mac Mini I'd carried back with me, so we did have a fair number of packages delivered to us there. I learned pretty quickly that the courier services in Japan were every bit as good as I believed them to be. Not only did they deliver more rapidly, but they also didn't just abandon packages on your doorstep where anyone could wander by and steal them. You had to sign for them in Japan so delivery could be proven. The way people just abandoned parcels in front of unoccupied houses meant that a misdelivered parcel or even a lost one would be hard to prove.

Beyond the superior speed and service of delivery, we found that courier services are much more convenient to arrange for shipping in Japan. I could be wrong about this as I have not lived in a major city in the U.S., but it seems like it's harder to locate a place to send packages from (and it's more expensive!) whereas in Tokyo, nearly every convenience store allowed you to send from their location (and there are convenience stores everywhere).

I definitely miss the courier services I experienced in Tokyo.
Posted by Orchid64 at 8:00 AM

Email ThisBlogThis!Share to TwitterShare to FacebookShare to Pinterest
Labels: courier, service, will miss