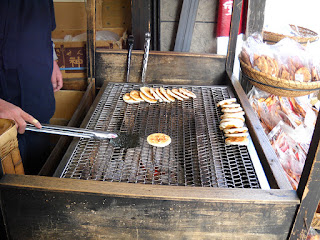 It rather goes without saying that people won't be making fresh sembei hot on a charcoal grill for me now that I'm back in the U.S. This fellow was making them in Kamakura when I visited there. Warm sembei, freshly brushed with sauce, is a unique pleasure.

In my very first "will miss" post, I said that I would miss the wide variety of sembei (rice crackers) in Japan. Now that I've been back for nearly 7 months, I can say that this is absolutely true. It's not that you can't get varieties of rice crackers in the U.S. because you can, but the ones that are made for the domestic market comparatively fail in comparison to their Japanese brothers.

My first experience with American-marketed rice crackers was pleasant enough, but for some reason they seem designed for anemic palates. They lack a strong crispiness and have the sense of being slightly stale and lacking in bold flavors, and absolutely lacking in variety. They do tend to be less fatty, but this is likely where they are failing as they probably are not lavishly coated with enough of the good stuff to give them the proper texture, or, simply not fried as some Japanese crackers are.

The strangest thing about the way rice crackers are offered here is that they are so relatively bland. For a country which loves it some flavor blasting and produces sweets that are so shockingly sweet in many cases that all other flavors are knocked out of the park, why are the rice crackers so limp and lifeless? I guess that anything which is "Asian" is seen as being demure, polite, and unassuming. It won't reach out and grab your tongue, but graciously walk up, bow, and then apologetically alight on your taste buds. The crackers made for the Japanese market know how to waltz up and take your taste buds for a ride,  not to mention give you a light crispy texture that leaves you wanting more. Though the Japanese prefer subtle flavors bordering on bland in their cuisine, that is not so when it comes to anything that might be consumed as a side snack for drinks, especially alcoholic ones.

I've found imported sembei in a few shops, but the prices tend to be on the ridiculous side, often double what I paid in Japan. While I do love me some flavorful sembei, I'm not quite prepared to pay $4 for a bag that once cost me a little over $2. I definitely miss the rich variety of well-made and tasty sembei that I had access to in Japan.
Posted by Orchid64 at 8:00 AM