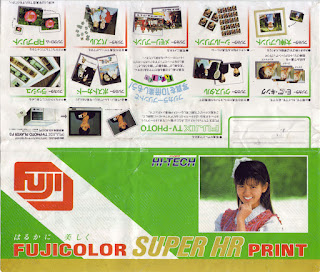 Memory is a funny thing, and most people don't realize just how peculiar it is. For instance, did you know that the emotions of an experience are electrochemically stored with the memory of an experience? You cannot unlink the feelings you felt at the time of an experience and the details of the experience itself. You can process the feelings to less powerfully hook them, but the two are always encoded in your mind together.

The way in which your brain stores the memory with the feeling is one of the reasons why sometimes you will see, smell, or hear something and have an emotional response, but not know why. That's because it's often easier to retrieve the emotional part of a memory than the details of that memory. If something makes you suddenly feel blue or happy, but you're unsure why. The inexplicable emotion is likely because of this sort of emotional recall over the details of the actual memory. With some effort, you may be able to dig down and find the story behind what elicited the emotions, but sometimes you just can't locate that particular "file".

One of the things about going through my big, fat memory books about Japan is that they evoke feelings as well as memories. Sometimes, I get one, but I don't get the other. This "Fujicolor" envelope, which is now empty, brings about two feelings, one good and one less so. I understood the roots of the positive one, but it took some time to dig up the latter one. The envelope itself originally contained photos that my (then boyfriend, now) husband sent me. The reason it's empty now is that the pictures are in the album, and he kept the negatives with him. I remember how thrilled I was to receive any pictures of him, and how even more excited I was to receive pictures of the two of us from the month we spent together in Tokyo. 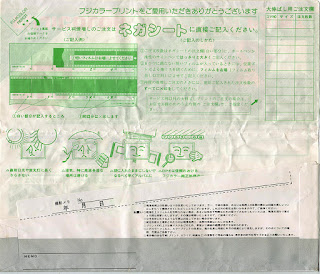 The second feeling was one of some minor discomfort, and as I opened up the envelope and looked at the cute little drawings telling you how to take care of your prints, I slowly figured out why. One of the things that used to be the case when you had your prints developed in Japan was that you were often given a little paper album into which you could place your photos if you so pleased. That may still be the custom, but so few people develop prints these days (including me), that I don't know if that's a type of "sabisu" still given.

What I remembered is that I associated print development and the Fuji logo with these albums, and I connected them with my time working for Nova language school. Students often brought in these flimsy paper albums full of pictures of their various trips and used them to have conversations in lessons or in the "Voice" room, a sort of lounge in which people could engage in free chat with a teacher for a very cheap price.

There are two aspects to this which were not the best memories for me. I'm somewhat embarrassed to admit that one was that I sometimes regarded the students as incredibly boring about such things. I'm sure that this was as much due to language limits and my youthful lack of patience as anything else as I believe you can make a conversational silk purse out of a sow's ear 80% of the time if you are a skilled enough teacher (and back then, I wasn't).

It was almost certainly the memory of my lack of ability and experience as a teacher that is bringing on a slightly negative feeling. My first two years in Japan were difficult in regards to teaching because I had zero experience with the culture and the type of work and I carried that sense of feeling like I had to tell people what was what. I was guilty of being too opinionated and judging the Japanese for not having opinions as most newbies (especially Americans) can be. My time at Nova is a reminder of immaturity and a lack of competence as well as simply being worked like a dog by a disreputable company that was known for lying to and cheating its employees.

So, one little envelope brought back memories both sweet and ever so slightly bitter, but that's okay. One way to recognize personal growth is to think about who you were and compare that to who you are now. It's where the value of memories lies. It's not about reliving past glory or happiness. It's about seeing how far you've come.
Posted by Orchid64 at 8:00 AM