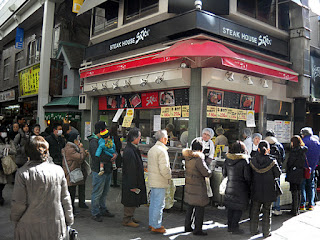 "Steakhouse Satou" (in Kichijoji) with a huge line of people. For years, this fairly average meat shop has gathered long lines because of word of mouth about the quality of the meatballs they make. Your granny's meatloaf is likely as good or better, but the herd must gather at the proper places.

I grew up in a rural area, and the only types of "herds" I ever encountered consisted of large bovines. I'm guessing the only way my town could have mustered up a crowd would have been for much of the population to show up at the same place at the same time. The way in which Japanese people tended to cluster about a popular place because it was popular with others was something with which I was pretty unfamiliar.

Since returning to the U.S., I have not experienced this sort of thing at all. However, to be fair, I'm pretty sure that part of the reason for that is that I'm in the suburbs most of the time and I think that, if I lived in a big city like New York or Los Angeles, I would certainly encounter places to which people flocked because of buzz.

That being said, I still feel that the way in which people flocked to something relatively pedestrian (like Krispy Kreme in its first year or the meat shop pictured above) was unusual and unusually annoying and I don't miss it.
Posted by Orchid64 at 8:00 AM